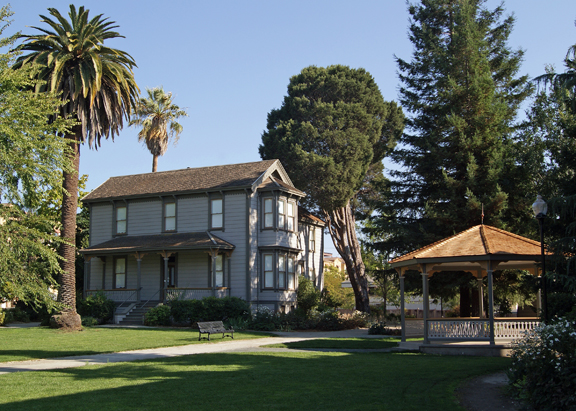 Galindo Home and Gardens with gazebo

This home was built in 1856 for Don Francisco Galindo and his wife, Maria Dolores Manuela (Pacheco) Galindo, Don Salvio’s second daughter. At that time, it was one of the few Victorian ranch houses in the county. As their oldest son, Juan “John” Galindo and his bride Marina “Sarah” (Amador) Galindo took up residence between 1875 and 1880, the original six-room house was expanded to ten rooms. After Juan and Marina’s eldest child Frederick, and Catherine (Hittman) Galindo were married in 1907, title was transferred to this next generation. Following Mrs. Catherine Galindo’s death in 1966, the home was maintained by her children. After the death of Ms. Ruth Galindo in 1999, the home became the property of the City of Concord. In 2010 ownership was transferred to the Concord Historical Society.

The Galindo Home has been completely restored by the Concord Historical Society and now serves as the Society’s museum. Tours are available on most Sundays from 1 PM to 4 PM (closed on holiday weekends), and by appointment (contact us).