SPOTLIGHT ON HONOARY BOARD – WILLARD BALLENGER 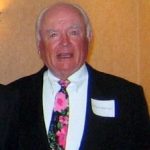 Mr. Ballenger was born in Concord and is the maternal grandson of Joseph Boyd, Concord’s first mayor. Willard is a member of “The Greatest Generation.” After graduating from Mount Diablo High School, he enlisted in the U.S. Army at the beginning of WWII. He served for the duration of the war in the 3rd Army, 80th Division, Company “D,” 318th Battalion, 4th Armored Division under General George Patton, fighting in France.

The 3rd Army made history in France going 20 miles a day. He was wounded near the Moselle River from mortar shrapnel. General Patton’s army was credited with relieving the 10th Airborne Division, which was being besieged by the German army in the snow at Bastogne, Belgium, known as the Battle of the Bulge.

Upon returning from his service he attended and graduated from the College of the Pacific, Stockton, on the GI Bill. He returned home to Concord and worked as the Contra Costa County Assistant County Clerk at the Court House in Martinez for 36 years until his retirement in 1987. He pursued his love of music for over 30 years, forming the Will Ballenger Trio, which played jazz throughout the Bay Area and the Central Valley. Willard was an accomplished band leader and jazz drummer. He fondly recalls playing Concord’s best nightspot, the Adobe (the Salvador Pacheco Adobe, which then was a restaurant and nightclub bar). He is a committed fan of Dave Brubeck who was his music idol, growing up in the same town as Dave.

Willard’s father, Wayman, was Concord’s city clerk for many years. His mother, Charlotte “Lottie” Boyd Ballenger, was a founder of the Concord Historical Society and taught first grade at Williams Elementary School and Sunday school for the First Christian Church in Concord for many years. She was especially loved for including music and class singing in her classes. Willard’s brother, Boyd, also served in WWII and graduated from the University of California on the GI Bill.

Willard loves horses and the horseracing and breeding business. He has been a successful owner and breeder of racing quarter horses for over 50 years. He raised the two year filly “Speedy Empress” who took second in the All American Futurity at Raidoso Downs, New Mexico, winning a $300,000 purse.  His horses have also won races at the Los Alamitos Race Track and county fair race tracks throughout California. He currently lives on his 20-acre ranch in Madera, and, in addition to having attained his 90th year, avidly manages his ranch and horses.