SPOTLIGHT ON THE HONORARY BOARD – Richard Crenna 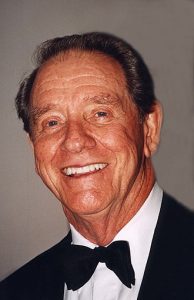 The Society is pleased to announce that actor Richard Crenna has been named to the Society’s Honorary Board. Mr. Crenna started his acting career at 10 years of age on a weekly Saturday morning Boy Scout Jamboree show. He was paid $1.25 for lunch and transportation. As a teenager, he often worked as many as eight radio shows a week, including “Gunsmoke”, “Red Ryder”, “One Man’s Family”, and “I Love a Mystery”. He his mother, Edith, was very supportive without being the stereotypical stage mother. When he went to a tryout, she would give him twenty cents for round-trip bus fare and a nickel to call her to tell her he had gotten the part. From this humble beginning, he became one of Hollywood’s best-supporting actors. He was a fast read, could play comedy as well as drama, and still be a great husband, dad, and grandfather to his children and grandchildren.

Mr. Crenna’s credits include radio, TV, and film. His early radio shows were “Burns and Allen”, “The Great Gildersleeve”, “A Date With Judy” and “Our Miss Brooks”. He also performed in many TV series including” Our Miss Brooks”, “The Real McCoys”, “Slattery’s People”, “All’s Fair”, “It Takes Two”, “Pros and Cons”, and “Judging Amy”. He made more than 32 big screen movies including “The Pride of St. Louis” with Dan Dailey, “The Sand Pebbles” with Steve McQueen, “Wait Until Dark” with Audrey Hepburn, “Body Heat” with Kathleen Turner and John Hurt, and the “Rambo “series with Sylvester Stallone. He received a Golden Globe nomination for his work in “The Flamingo Kid” with Matt Dillon and, the highest praise of his contemporaries, an Emmy for the TV movie entitled “The Rape of Richard Beck”. He also has a Star on the Hollywood Walk of Fame.

He also was also an accomplished TV show director, directing many episodes of “No Time for Sergeants”, “The Andy Griffith Show”, “The Real McCoys” and “Lou Grant”, among others. As a member of the Screen Actors Guild in the 1960’s, he successfully led a fight to include TV roles in residual payments for actors, which before then were only being paid to radio actors, and to improve the pay scale for all screen actors. He served a term as the National Celebrity Chairman of the American Cancer Society and headed up many fundraising events. For many years he played in the Bing Crosby “Clambake” Golf tournament at Pebble Beach.

He was the son of Dominic Crenna who was born and raised in Concord and the grandson of Concord pioneers, Pietro and Mansuetta (Vasconi) Crenna who had both immigrated from Lombardy, Italy, and who raised 13 children at their home on Almond Avenue in Concord. He lived in Los Angeles but spent many summer vacations in Concord as a child and teenager because his father, who had been born and raised in Concord, wanted his son to experience life in a country town.

The Society is very happy to recognize Mr. Crenna’s accomplishments and thanks his family for honoring the Society by accepting his appointment.